An update on our campaign from Simon Hood, the new Chair of the Dorset Hall Group (read more on this personnel change below).

As posted, scaffolding was erected and boarding secured around the site perimeter during the third week of February. The ring of steel was increased after DHG took pictures of further deterioration to the fine filigree plasterwork ground floor ceiling and the gap in some of the roof tiles. Despite pleas to Clarion Housing, Borough of Merton and Historic England to install temporary protective coverings and much patience given the heavy rainfalls causing continuing damage, none have been installed. 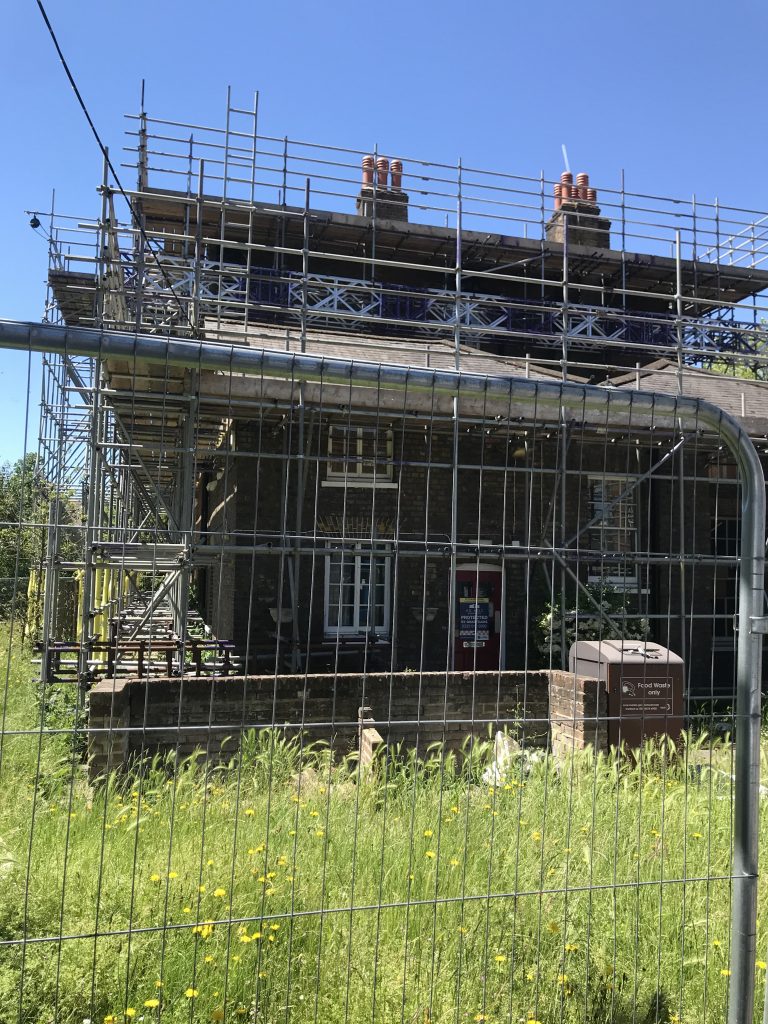 Tom True an architectural historian and member of DHG (see below) said: “Historic friendships and alliances, breakthrough campaigns, and brave events behind securing the vote for women took wing beneath the ornamental ceiling of Dorset Hall. The ceiling decoration is a significant example of the patterns and festoons that brought grace and glamour to many London townhouses in the 18th and 19th centuries. The beautiful plasterwork is more than delicate surface embroidery. It defines and articulates the room, relating different elements within it. It is absolutely essential to the architecture and character of Dorset Hall. “

With the torrential rains, DHG has pointed out the likelihood of wet and / or dry rot causing further damage.

It is now mid-June and no repair works have commenced.

However, there has been a commitment by Clarion to make the building “weather proof and watertight ” as required under The Planning (Listed Buildings and Conservation Areas) Act 1990 and Merton Council have initiated an “enforcement process” to this effect, with Historic England being kept in the picture. DHG has been told that various contractors have provided estimates and different repair materials are being considered.

DHG continues to press for a repair programme using materials that provide for some longevity and that the building should be registered “At Risk” by Historic England.

DHG will continue to press all parties to comply with their obligations.

The importance of the building as a Heritage Suffragette monument and a landmark of democracy for the Women’s Vote was highlighted by the unveiling on 8th June of a memorial to Emily Wilding Davison, who sadly died 100 years ago at the Epsom Derby whilst trying to throw the “Votes for Women” sash over the King’s Horse. Emily was a close friend of Rose Lamartine Yates, who owned Dorset Hall, which was a refuge for the suffragettes after force feeding by the Government. Rose was a leading organiser of Emily’s funeral procession attracting over 100,000 mourners and Rose’s husband Tom was their legal representative at the associated inquest. Recognising Dorset Hall’s national historic importance in the fight for women’s rights has an up to date meaning with the recent tragic murder of Sarah Everard.

Merton Council held an Extraordinary Meeting on 21st April with a proposal to help tackle violence against women and girls in the Borough with proposals unanimously supported by all councillors present. DHG believes that once repairs have been undertaken Dorset Hall could resume its historic role by becoming a Women’s Drop-in Centre fulfilling a need exacerbated by Covid.

DHG would like to thank those individuals within all three political parties that have provided their support and local community groups especially Merton Citizens and the faith groups that support them as well as leading law firm Clifford Chance.

Our Chair Barbara Gorna has asked to step down from this role due to increased business responsibilities in Lancashire and will become Deputy Chair. Simon Hood takes on the role of Chair.

Tom True is an architectural historian and heritage professional, who was awarded his doctorate from the University of Cambridge in 2013. He is former Assistant Director of the British School at Rome, the UK’s leading overseas Humanities research institute and Fine Arts and Architecture academy. He has worked on the inauguration of Musée Narbo Via, a major new civic museum of Roman culture in Narbonne, designed by Foster + Partners.